Albuquerque Homes and Condos for Sale

Located near the center of New Mexico is Albuquerque, the largest city in its state and Bernalillo County’s county seat. This city is home to the University of New Mexico, the biggest public university in New Mexico that also has a medical school. According to Walk Score, a company that assesses cities’ walkability indexes, Albuquerque is one of the most walkable cities in the United States. In other words, many amenities are accessible by foot, and if you need to travel a bit farther from home, you can take the bus or ride your bike on the city’s various trails. With a population of over 559,000, living here may feel slightly overwhelming, but you may run into a fellow homeowner who would be more than happy to show you around so that dwelling here would feel more comfortable.

Albuquerque is filled with many attractions and events dedicated to the arts, culture, sports, nature, etcetera. A marvelous site to visit is Sandia Peak, and the way to get there is by the Sandia Peak Tramway, an aerial tramway. It happens to be the longest aerial tram in the country. During warmer months, it’s open for nature hikes and bike rides. You can also go there during the winter season to ski. Watch hot air balloons at the Albuquerque International Balloon Fiesta, the world’s largest balloon festival. This event occurs during the first week of October and also includes food, arts and crafts and live music. The New Mexico Museum of Natural Science and History carries interesting scientific and historical exhibits like a planetarium, exhibit halls dedicated to dinosaurs and even one that honors the history of the personal computer. It also has a gift store, a cafe, and a giant screen theater. In addition to the University of New Mexico, Albuquerque has 89 public elementary schools, 27 public middle schools, 13 public high schools and 10 alternative schools. This city also offers private schools such as religious, Montessori and special education institutions. There are even several other post-secondary schools that include universities, community colleges, and vocational schools.

Nearly 62 percent of real estate properties in Albuquerque are single family residences. Other homes in Albuquerque include apartments, townhouses, and mobile homes. A little over 50 percent of residences were constructed during the years 1970-1999, and most of them have three bedrooms. Whether you’re looking to raise a family or start a business, Albuquerque is a great city in which to live because of its nice weather, affordable cost of living and that you can get to many places by foot.

This incredible single story home is currently under construction in our newest GATED community, Aspire! This master planned community will feature a park, landscaped cor...

Architect's own luxurious home resort located in an exclusive private gated community in Old Town/Sawmill can be yours. Home was rebuilt in '09 with unsurpassed quality w...

Welcome home to this bright and cozy home in Ventana Ranch! This single-story home features an open floorplan with a breakfast nook, a clean and bright kitchen that leads...

Welcome to your gorgeous, move in ready home!!! This Green Build home has it all! Giant owner's suite downstairs. Three spacious rooms and a loft upstairs. Front room th...

Relisted. Welcome to your new home in the desirable northeast heights of Albuquerque! With fresh paint throughout, this well-priced home is move-in ready and waiting for ...

OPEN HOUSE SUN 2/5 1-3. Beautifully updated FOOTHILLS home. Pride of ownership shines both in & out of this original owner home. You are greeted by the light & bright L...

A 4 bedroom and 3 full bath condo located in the gated Villas community! This community provides lots of amenities including a community pool!! Popular open bright floor ...

You won't want to miss this pristine brick home located in the well sought after Reserves at Four Hills! Nice bright open floorplan with the great room overlooking the st... 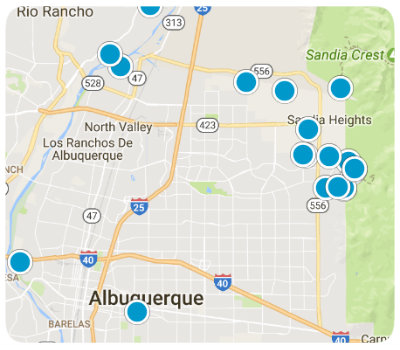